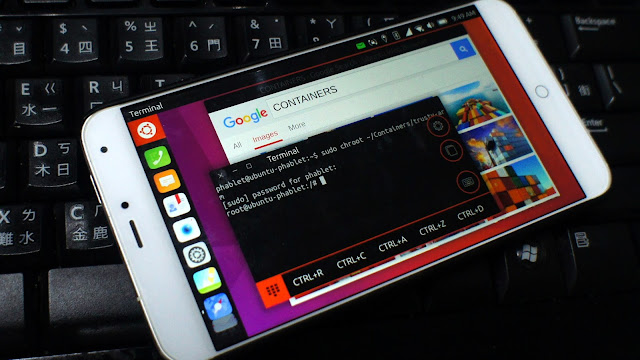 There are few ways to use containers on Ubuntu Touch, but my favorite one is using qemu-debootstrap. This is a layer atop debootstrap, which is easier to use. But it does require a package that is not present on the Ubuntu Touch by default, and approx 80MB of additional disk space. This is only if you are going to build containers, and you do not need it to just use the containers once they are already created and distributed. So without a further do, I will cover these topics:

DESCLAIMER: using qmu-debootstrap in conjunction with qemu-system-arm has one amazing advantage: you can actually fully create the container on your Ubuntu Desktop x86_64 because the qemu-system-arm will emulate ARM architecture. In this article Iam showing you steps for doing everything on your Ubuntu Touch device, but I want you to know that you don't have to. Sometimes building this on your desktop can be even faster.
Installing qemu-debootstrap

Connect to your Ubuntu Touch device either with adb shell or ssh, and run:
now notice that gemu-user-static and qemu-system-arm are the packages that will provide us with qemu-debootstrap, but we are also installing mc package to have most user friendly terminal mode file manager and text editor at hand, as well as xauth, which we will use in the last step to make X forwarding over SSH possible.
Be advised that qemu-system-arm is basically only needed on non-arm host. Ubuntu Touch or any other arm linux does not require this. On the other hand it will allow you to run arm chroot even on a non-arm machine, ie. on your Ubuntu Desktop x86_64. That will allow you to have a native ARM environment on your dekstop for natively building apps.

For the purpose of this tutorial we will create a container with Ubuntu 14.04 Trusty ARM, into a trusty-arm.img file under ~/Containers, so:

The image is now created and it has a valid filesystem on it. The next step is to mount this image, and create the chroot environment inside using qemu-debootstrap. We will mount the image into a folder with the same name as the image file (PLEASE read the comments within!):


This way we already have a working chroot inside the mounted image, but before we use or share this image to others, we can first do a bit of initial configuration, so later we just have this out of our way. TO do it, we will now chroot into this new container:

And when finally inside, we will carry out some initial pre-configuration:

At this point your container is ready. It has some basic config included, as well as whatever packages you installed, so when anyone uses it, the stuff will be there already.

Using these containers comes down to few basic actions:

As for obtaining the image, I will not be covering this here. It is really all up to your own liking. You can copy it with a usb pendrive, you can host it on a server for downloading, or really, whatever you fancy. Le'ts just asume that you already have the image file, and move from here.
For my tutorial I am using a uniform naming, so all that is happening goes inside ~/Containers directory. On Ubuntu Touch devices, the filesystem is read-only excep/click.ubuntu.t for user's home directory, and few other places belonging to userspace (like /opt/click.ubuntu.com/).
Also, as my general rule, I mount chroot images under folders that are also placed under ~/Containers and have the same name as the image file. So let's go:
At this point you are inside the chroot container, and your prompt have changed: 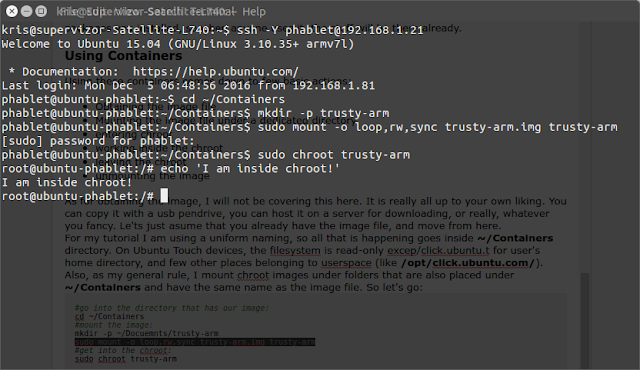 And when you are done using the container: 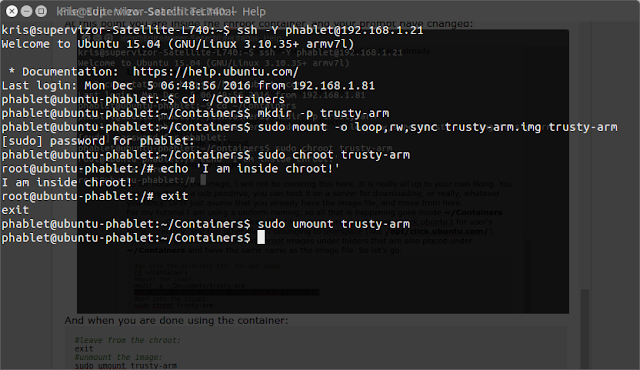 And that's how you do it. One thing that I remember is that I couldn't when inside chroot, find out the image free space using df -h command. I have to go outside the container, and call the command filtering output with the name of the chroot folder, and it only works when the folder is currently mounted: 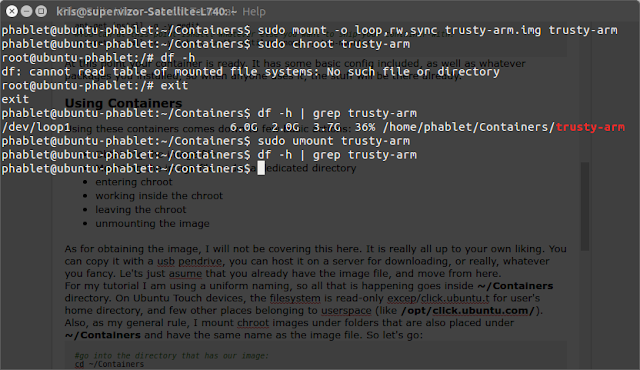 Also worth noticing is that your chroot is isolated from your actual filesystem, and while within, you cannot access files from your host filesystem. Unless you mount some local files into the container. Let's say I'd like to be able to access my local Pictures folder within the chroot, no problem, just follow thess steps when the image is mounted: 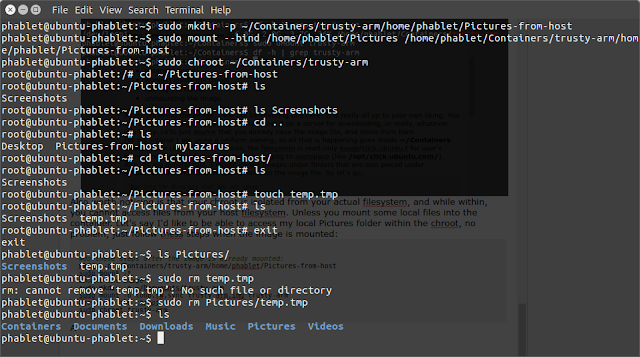 This is the most cool and useful part of this tutorial. X Forwarding is what will allow you to install GUI apps in a chroot container on your Ubuntu phone/tablet, and then run it on the screen of your Linux desktop or laptop.

PLEASE also see my other post for more detail on the ssh+chroot scenario, especially regarding so called magic cookies: SSH and Ubuntu Touch - everything you want to ask but are afraid to ask

In order for this to work, you will first have to enable X forwarding for the phone itself, and then forward this configuration into the chroot.
Now, this is actually super interesting, because the Ubuntu Touch devices run Unity desktop on Mir display server, and they lack the X11 display server. So how are you suppose to enable X forwarding on the phone itself first, if there is no X on the phone?? This is the interesting part!
Turns out, that all you need for X Forwarding over SSH is to have a valid .Xauthority file in the home directory on your device. SSH will need only this file to initiate X Forwarding. Once you have this file on your phone, you just need to copy it into the home directory of your chroot container.
So what if you don't have this file? How to make it? You can either do that on the phone itself, or do it on your Linux desktop and then upload to your phone. I will show you how to do it on the phone. Do you remember earlier in a part of the script I was installing package xauth ? This will create the .Xauthority, so if case you didn't install the package already, just do it like this:

Now let's generate new .Xauthority, just copy paste these commands:
So yes, it requires installing xauth, but this package is really tiny in size, so it shouldn't be a big deal. If you do however mind, you could always backup your .Xauthority on your desktop, generate a new one using the exact same method, upload it to the phone, then restore the previously backed-up original file on the desktop.

Now, we want the very same .Xauthority file inside chroot, but since it can be considered a security risk to just leave it there, you could copy it before chrooting, and then deleting it when you exit your chroot, it's up to you. Also there are few preparations before you can fully enjoy the X Fowarding, and you could script them so that you can always initialize the chroot before getting in, and also undo any initialization after you are done working with it:

Now that we are done with the tutorial, time for some facts checking:

All in all, it is always a great thing to carry your legacy apps in your phone, and when having access to your Desktop/laptop launch them on its screen, like this: 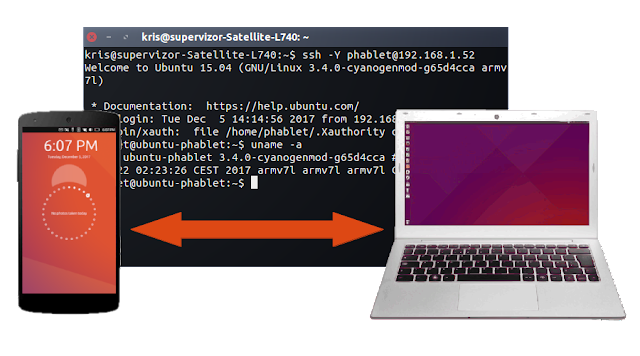 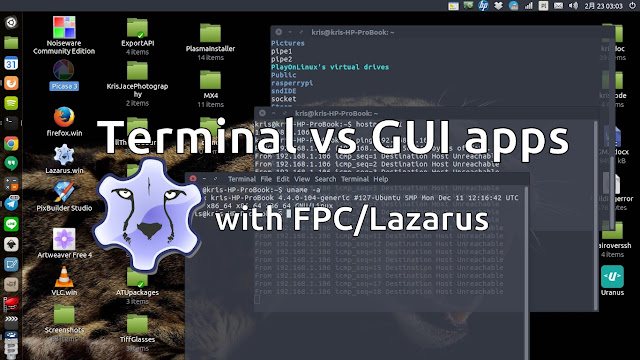 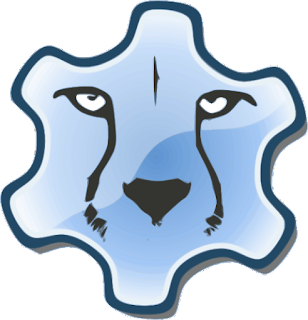